I had never heard about Yonkers – until recently. I was reading a book in which the city of Yonkers, just bordering the Bronx, plays a central role. The book was World War Z by Max Brooks. Now, for all the people out there that are not nerdy enough, this book probably won’t ring a bell, because it’s a book about… ehm… Zombies.

In short, in World War Z the world has been infested by a zombie plague. Ten years after the plague began, an agent of the United Nations Postwar Commission publishes a report, consisting of interviews with witnesses from different nationalities. World War Z is this report.

Since we’re passing through Yonkers on our journey, we thought it would be nice to talk to the author of the book, Max Brooks. He is an American author, screenwriter – and a zombie specialist. He knows everything about them and wrote more than one book about this thrilling topic. When we asked him if he could answer some questions about the elections and American society in general, he was all up for it. Here are his replies, which he sent us via email.

Mr Brooks, in your book you describe a global crisis that almost causes the extinction of human race. Do you consider yourself a pessimistic or an optimistic person?

VERY optimistic, simply because I have to be. Life is just too hard and there are too few happy endings not to fight for every scrap of joy.

Can you imagine anything like that actually happening? How would it be different from what you describe in your book?

Hopefully, if it did happen, the outcome wouldn’t be as bloody.

What happens during the Battle of Yonkers in World War Z? 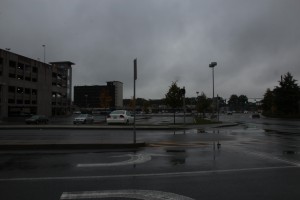 Parking lot in Yonkers: No Zombies. Yet.

The U.S. Government wanted to prove that it had matters under control, and wanted to stage a large scale, very public battle with the dead in order to restore confidence. Unfortunately, a perfect storm of incompetence, arrogance, and panic served to turn what should have been a very public victory into a very public defeat!

Why did you choose Yonkers as the place of the biggest defeat for the human race in the fight against the zombies?

Yonkers is just outside of New York City and it stands at a perfect “Choke Point” between the freeway and Hudson River. If I was going to chose a spot to take on the living dead, it would be Yonkers.

In an interview you once said that World War Z has actually happened at some point in human history. All you did was zombify it. What real events is World War Z referring to?

World War Z, as an entire conflict, never happened, but pretty much everything else did. The Battle of Yonkers happened in Isandlwana. The Parents killing their children in the church has taken place in Saipan/Okinawa. The anti-zombie army square tactic is the same one as the British Square. The Chinese cover up has been used during the SARS epidemic. The Japanese social internet hermit refers to the Hikikomori phenomenon, which is a real condition in Japan nowadays: young adult withdraw from social life, often seeking extreme degrees of isolation. The list goes on and on…

Why did you choose Zombies? What do you like about this genre?

Zombies are great way to expose “big” issues, global issues. I like to think about the problems that face us as a species and zombies are a great way of doing that.

Is there a political message behind your book? And if there is, how would you summarize it?

There are no more local problems. We’re all stuck together on this crowded little world.

One of the characters in your book says that “in totalitarian regimes – communism, fascism, religious fundamentalism – popular support is a given. You can start wars, you can prolong them, you can put everyone in uniform for any length of time without ever having to worry about the slightest political backlash. In a democracy, the polar opposite is true. Public support must be husbanded as a finite national resource. It must be spent wisely, sparingly, and with the greatest return on your investment.” This quote seems to suggest that a democracy is not well equipped to fight against zombies. Do you see democracy failing in other areas as well? 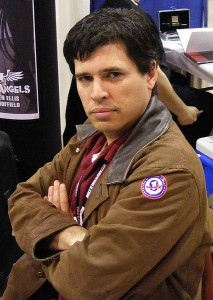 I don’t see Democracy as failing at all! I think Democracy is the best way to fight a zombie menace. It may be slower than a totalitarian regime, it may take a lot more political will on the part of the people, but democracy is the most flexible, robust, sustainable way to solve a large crisis. The problem with totalitarian regimes is that they can lead their whole nation right off a cliff… and I don’t need to lecture Germans about that.

How good are today’s politicians in husbanding and spending public support?

Depends on the politician. I think that Obama has been much more conservative with public support than, say George W. Bush who essentially went on a spending spree and wound up broke by 2006.

What defines democracy for you? And how close is the US to your definition of democracy?

For me, Democracy is a lot of homework and no one to blame. We can’t rage against “the system” or “the leader”. In a democracy we ARE the system. We lead ourselves. And yes, I think the U.S. is a perfect example of democracy. Where else in history has nation built on black slavery actually elected a black president? We’ve come farther, faster, as a democracy than any other civilization on earth. I’ve never been prouder to be an American.

Do you consider yourself a political person?

Not really. I like to be informed, I vote. I do my part.

Do you think that artists and writers should be interested or even engaged in politics?

I think EVERYONE should be engaged in politics. It’s the one thing that affects us all. I personally don’t care which football team wins a match or which celebrity gets a venereal disease, but politics… no one can escape it.

What does it mean to you to be American?

We are the world’s eternal dreamers. We are the nation of “Yes We Can”! I’ve lived in Europe several times and all I ever heard from my friends was “No We Can’t”. To me, being American is reaching for the stars no matter how many times you fall on your ass.

What American values and traditions do you cherish the most and which ones do you feel less strongly about?

I cherish our optimism, our ability to reinvent ourselves, our rejection of the tyranny of history. I do wish we weren’t so isolationist. We think the rest of the world doesn’t matter, and we consistently stumble into international problems because of it. No matter where we go, or what we do in the world, we can’t wait to go home. I wish we realized that the whole planet is our home.

Which of the two candidates do you think would be better prepared to deal with a zombie plague?

And can you reveal to us who you are supporting in this presidential election?