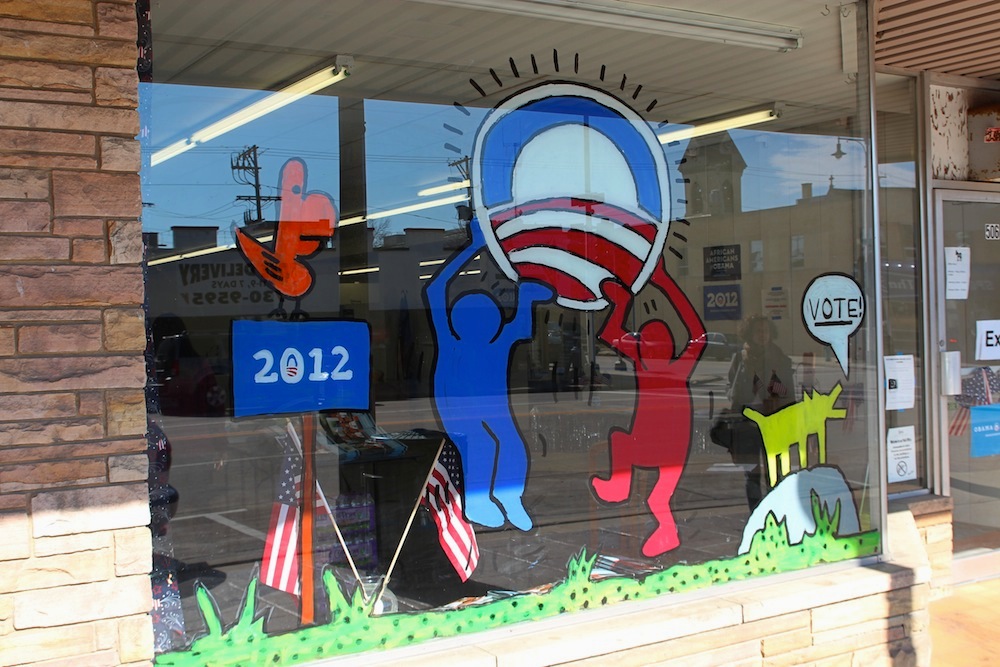 The Obama campaign office in Appleton

According to Wikipedia, Green Bay is the smallest metropolitan area in the United States that has a professional sports team, the Green Bay Packers. But boy, are people proud of their football team! Everybody here’s a Packers fan. And when the game starts on Sunday at 12 o’ clock, you’ll find them either in the stadium (tickets are sold out for the next three years) or in front of a TV. When a Packer’s game is on, people in the Green Bay area forget about everything – including politics.

We walked into the Obama campaign office in Appleton, near Green Bay, at 12 o’ clock this sunday, right after kick off. As it turned out, this is a perfect time to visit a campaign office because the staff has more time to talk than usual. “When the game is on, we cannot call anyone or knock on doors”, they told us. “People would get upset.”

The campaign office had no TV to watch the game on. “We miss the game to work for Obama”, one of the volunteers said jokingly. And that’s not the only sacrifice they make. He told us that they’ve been working 13 to 14 hours each day, including on the weekends. Their job is to call potential voters and to go canvassing from door to door. Right now, they’re preparing for Jill Biden’s visit to their office, taking place tomorrow.

The office team has also organised an event for people to vote early, which will start tomorrow. Early voting will play an important role in this election, as it did in the 2008 race. Nationwide, Democrats have been particularly active to register voters and to encourage them to cast their ballot before November 6.

For those who don’t vote early, campaign offices like the one in Appleton make sure that people know where and how to vote on election day, that they don’t forget about it altogether and that they have a ride to the nearest polling station.

These efforts are all the more important in Wisconsin, the state where Green Bay and Appleton are located. Wisconsin is a swing state. In the latest polls, Obama leads Romney by 51% to 45% among likely voters. Given a margin of error of plus or minus 3.1%, this isn’t a comfortable lead for the president.

Therefore, the volunteers and the staff at the Green Bay and Appleton campaign offices will continue to identify and contact mainly undecided voters in both cities. Just like the Republicans we talked to in Saginaw, they were a bit reserved when we asked how exactly they singled out these crucial voters and what data they have about them. In general, we’ve heard that parties take into account whether a person has supported a party or candidate in the past, but also information such as what car they drive or magazines they read.

The volunteers we met today really impressed us with their commitment to the Obama campaign. For instance, we met a high school student who currently does an internship in the Appleton office although she isn’t allowed to vote yet. The other people at the offices were also mostly young, probably in their twenties. One of them had just graduated from college. “I think of campaigning as a form of civic engagement”, he said when we mentioned Tocqueville.