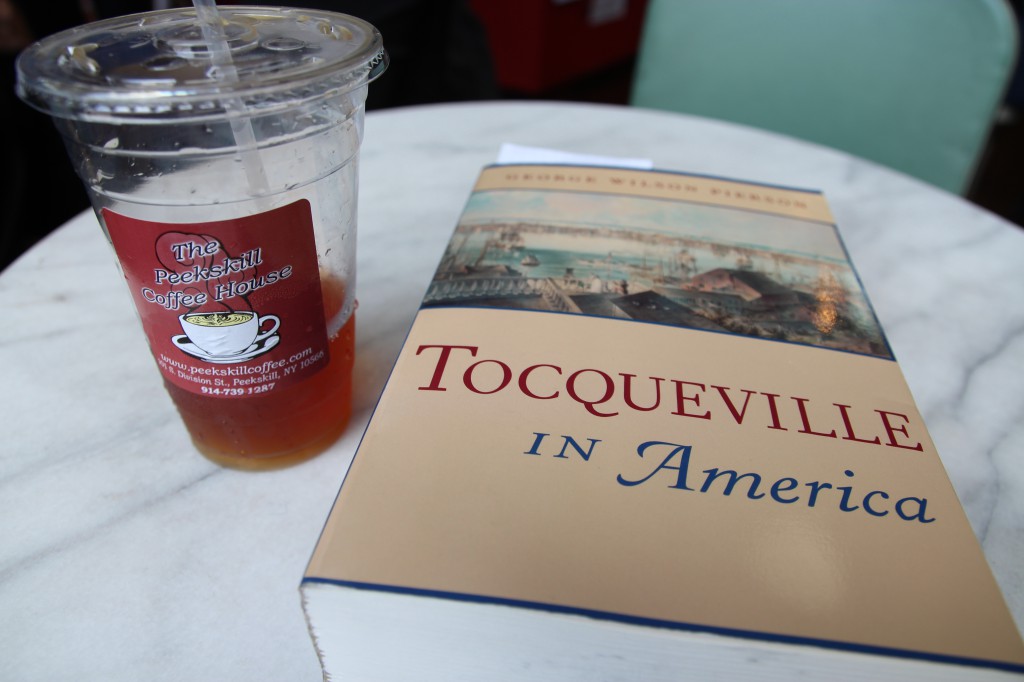 We’ve been carrying around a big book with us. At first, we had been hesitant to bring it because it’s quite heavy. But now we’re happy we’ve got it with us. The book is called Tocqueville in America, written by George Pierson, the first official historian of Yale University. Pierson collected and translated many of Tocqueville’s and Beaumont’s letters, notes and diary entries. He then added his own commentary and explanations to arrive at a book that at times reads like a great adventure story.

As we travel along Tocqueville’s route, it’s been fun for us to read the parts of Pierson’s book that correspond to our current location. For example, while driving around the Great Lakes in our rental car, we read how Tocqueville and Beaumont ventured on horse back into the “wilderness” between Detroit and Saginaw where they encountered Indians and American pioneers.

Right now, we’re in New Orleans. Pierson’s book tells us that Tocqueville and Beaumont only spent three days in the city – like we do. They did a bit of sight seeing, went to the theater and talked to lawyers and politicians. In his diary, Tocqueville noted: “Population similarly mixed, faces of all shades of colour. Language French, English, Spanish, creole. General appearance French; and yet signs, commercial posters usually in English. Industrial and trading world, American.”

The two Frenchmen also went to talk to Monsieur Guillemin. The French consul in New Orleans mentioned to them that the prosperity of the region had increased a hundred fold in the last 15 years. When Tocqueville suggested that the reason for this might be that Louisiana had joined the United States and adopted some of its republican institutions, Monsieur Guillemin resolutely rejected that idea. The following paragraphs might still be an inspiration for anyone who wishes to criticise the interventions of “big government”:

Do you wish to have an idea of the public administration? Examine the streets of the city, what wholes, what lack of order and alignment: The city, however, has more than a million of revenue. But into what hands it passes, god only knows.

Do you want to have a clear-cut opinion about the wisdom of the deliberating body? Read the names of those who compose them, obscure people, lawyers of the third order, village intriguers. One would [be tempted to] say that [there is] a law preventing the choice of people of merit and talent. Nothing simpler. It is the lower classes of people who have the majority in the electoral colleges.

They choose from their own kind. Open the acts of the sessions. It is a veritable penelope’s web. To make, unmake, remake, is the work of our legislators. The spirit not of party but of coterie absolutely directs the state. They suppress a position to ruin a man or create one to give a living to an honest friend persecuted by fortune. These, gentlemen, are the republican’s institutions which have made and still create every day the prosperity of Louisiana.

Well, in the present state of affairs America, in order to prosper, does not need either able leadership or deep-laid plans or great efforts, but liberty and still more liberty. The reason for that is that no one yet has any interest in abusing that liberty.