We went to see a football game in Nashville today. The Tennessee Titans were playing against the Indianapolis Colts. Before the game our couchsurfing hosts took us tailgating in the stadium’s parking lot. Tailgating involves drinking beer and having a BBQ at around 9 o’ clock in the morning. Good times. While sipping away on our cans of Bud Light we met Scott, a friend of our hosts and a firm Republican.

We had some really interesting conversations with Scott, a project manager in the construction business. No one else we’ve met has argued so passionately that the government should stay out of his life as much as possible. Its role is to “build roads and bridges and to keep the hospitals open”, he said. All social and religious issues should be private. The government would only provide a basic level of benefits: “Nobody will be cut out”. 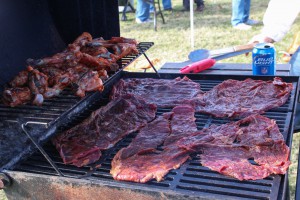 The rest of the guys we were tailgating with seemed to agree. We were all standing around the charcoal BBQ to warm our hands because the temperatures were very low in the morning. At least the beer stayed cold. The chicken wings and the fajitas, our breakfast, were excellent.

“We’re all voting Republican here”, one of the guys said proudly. Republicans are better for businesses, that was one of their explanations. Another line of argument went like this: The United States have prospered for so long because the land provided opportunities and resources for everyone. These are now drying up. The Democrats are trying to limit people’s opportunities even further by increasing centralized control, instead of giving them the freedom to pursue their goals. “Big government” is bad – that’s the message we took away from this conversation in the parking lot. 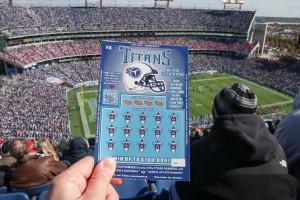 The game afterwards was fun (although Sarah admits she found the tailgating more entertaining). The Tennessee Titans were in the lead for most of time until the Colts scored an equalizing touch down in the fourth quarter. They went on to win the game in overtime, thanks to an acrobatic feat by running back Vick Ballard.

Before kick-off we got a real taste of American patriotism when everybody got up to sing the national anthem and two fighter jets flew across the stadium. Later the fans stood up again to greet a group of veterans on the field.

After the game we walked back to the parking lot and offered to drive one of the pick-up trucks home (we thought the other guys might have had a few beers too many). Scott was with us on the drive. We noted that he hadn’t fastened his seatbelt. “I never do,” he said half-jokingly. “That’s the government telling you what to do again. I used to drive cars that didn’t even have seatbelts.”