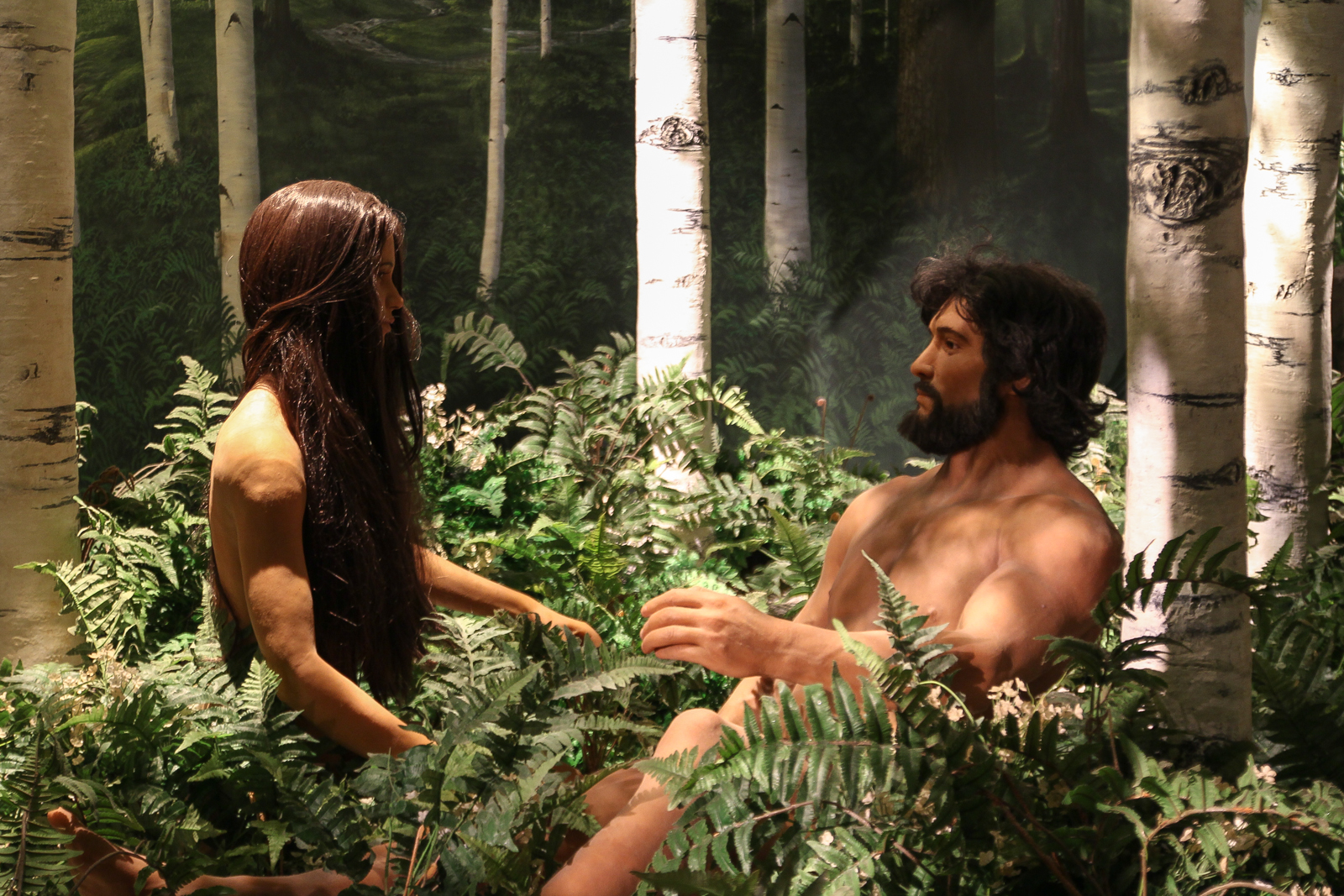 A plastic version of Adam and Eve in the Garden of Eden, Kentucky

“A Protestant?” asked Eugenia.
“I am an Unitarian, madam,” replied Mr. Brand, impressively.
“Ah, I see,” said Eugenia. “Something new.”
She had never heard of this form of worship.

I just have to admit that it’s quite difficult for me to understand the differences between the various religious institutions of Christian faith in the U.S. While driving from town to town, we came across many churches and temples: Baptist, Presbyterian, Methodist, United, Episcopal, Evangelical, Lutheran Churches, you name it! I don’t know exactly how these denominations differ from each other: whether they believe in God as a single being or a trinity, whether they reject transubstantiation or pledge for a return to the biblical text – I really don’t care. They can believe in whatever they want and their faith should be respected.

However, today my tolerance in religious matters was pushed beyond its limits. On our way from Louisville to Cincinnati, we stopped at the Creation Museum in Petersburg, Kentucky. As it says on its website, the museum “brings the pages of the Bible to life, casting its characters and animals in dynamic form and placing them in familiar settings.” It tells its visitors, “prepare to believe”.

The book of Genesis coming to life? An illustrated, walktrough exhibition of the first books of the bible could actually be fun, we thought. Surely, it has to be very kitsch, but hey, why not? So we entered the exhibition halls, which were filled by animated dolls, XXL-sized screens and plastic fauna. Very kitsch indeed. 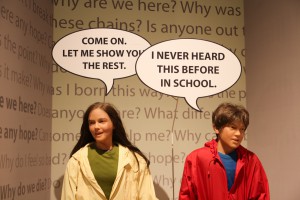 My tolerance towards bad taste is really high, so I was fine with that. But what was challenging for my open-mindedness was the blunt demagogy used in the museum. Its attempt to refute all scientific achievements of the last centuries is farcical. The exhibition claims that the earth was created only 6,000 years ago and it took God only 6 days to do so. Literally, 6 days. Later on, one learns that the Great Flood has created all geological formations (including the Grand Canyon) and fossils. Noah saved two of each species from the Great Flood, including the dinosaurs which went extinct only in the Middle Ages (then known as dragons) when knights used to kill them for a living. And so on.

This whole Flood theory reminded me of something I read two years ago, while I was working at the Museo Palazzo Poggi in Bologna. It owns a fossil collection by two scientists, John Woodward and his student William Whiston, who also believed in the Flood geology. Too bad they lived in the 18th century and their theories were already refuted by various scientists back then. 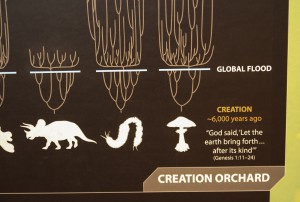 What irritates me is that people might be easily influenced by the banalities propagated in the museum if they don’t have a proper education. Here is another example of the kinds of arguments displayed in the museum: a frog has a multitude of unique characteristics that are useless taken alone. Therefore the creature and all of its features must have been created at once. So there we have our proof of God. Descartes couldn’t have done it better. Here’s the pattern again: science is (supposedly) unable to find an explanation for a certain phenomena. This is where God jumps in as the explanation. Pretty convenient, I find.

While walking through the Creation Museum, I just thought what God (if there is one) would say if he actually got to see all this. As I already mentioned, the exhibition can be described as something between a blockbuster movie and a Disneyland attraction. One of the most irritating things is this deep voice of a narrator (you know, the kind of voice they use at the beginning of the “Transformers” movies), constantly following you around, that explains how God created the world in six days, why Adam and Eve were thrown out of paradise and how Noah built his Arch. The different rooms of the exhibit even have dramatic titles like “The catastrophe” or “The sixth day”. I don’t think God would be amused to see his words turned into an amusement park and being monetized like this. 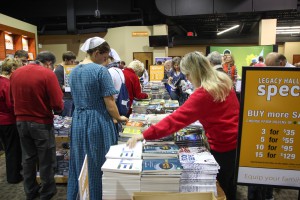 One of the highlights of our visit was the moment we met Ken Ham, founder of the Creation Museum and president of Answers in Genesis, the Christian apologetics ministry that supports young Earth creationism and a literal interpretation of the Book of Genesis. Unfortunately, we arrived at the very end of the public talk he was giving. He was advertising some of his books about creationism. There were books for every target group: for children, for teenager, for disbelievers and many others. He seems to be a pretty good business man. He knows how to play with audiences, how to sell books, how to talk and to present himself. It’s not even relevant if he really believes in what he is selling or not.

At the end, Ken talked about his last published book called “The Lie”. He calls it “his bible”. It is basically a book that he wrote decades ago and that know is being printed in its 25th (!) edition. The Creationist was bragging about the fact that he didn’t have to revise much in the book. “The arguments that I used back then are the same ones that I use today”, he explained. “And you know why? Because the bible hasn’t changed.” The audience was cheering.

To get a detailed and brilliant description of the different rooms in the Creation Museum, I highly recommend the article Roll over, Charles Darwin! by A.A. Gill. He says everything that needs to be said about it.